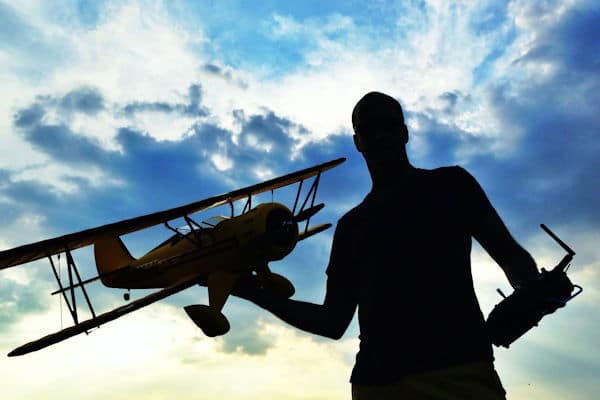 Why Buy an RC Plane?

Remote control electronics have been a staple in many people’s childhoods, whether in the form of train sets taken out at Christmas or remote-control cars swerving around the house. The childhood interest can become a serious hobby as you grow into adulthood. We even put together this list of the best remote control airplane for adults. Remote control planes are one of the most exciting options in the RC collection to choose from. They vary in size, are nimble and fast, and they can perform a variety of stunts that other remote-control vehicles cannot. Getting into the game of RC planes is not as complicated or expensive as you might think but there is a lot of information for you to research. If you are unsure on how to get started, check out these great remote control airplanes for beginners. Here’s a helpful guide to navigate through the intricacies of getting into remote control planes.

RC planes refer to a variety of remote control aircrafts that vary in size, design, and speed. The types presented vary in degree of expertise in the hobby as well as what people prefer.

The biggest form of remote control planes there is, giant scale models are made to replicate aircrafts in full-scale. These types of models are used to test out potential aerocraft designs as well as replicate models from the past.

Sailplanes and gliders are RC airplane models that do not have any propulsion system on them. Flight is established with these planes through winds or thermals that give the plane a natural lift. There are also powered gliders that gain more speed through an electric motor.

Remote control jets tend to be more expensive than other models. They’re usually powered by ducted fans or micro turbines and are constructed out of a variety of material such as styrofoam, carbon fiber, and fiberglass. These RC jets can vary in size and are used for a range of purposes including helping airlines.

Pylon racers are remote controlled aircrafts that are small and speedy. They are driven by a propeller and are usually raced around tracks. There are many different designs and models that are popular among people all over the world.

Remote controlled helicopters are classified with RC aircrafts but they belong more in a category of their own due to the differences in flight training, construction, and aerodynamics. Those who enjoy other remote-controlled aircrafts will most likely also enjoy RC helicopters.

These types of RC planes take their design from inspiration in nature. Some can look like birds and many are designed to flap their wings, which is how they get the name ornithopters.

Types of Kits and Construction

There are a variety of ways and a bunch of kits that are out there to help you construct your RC plane. The different types require varying amounts of skill level, different levels of assembly, and a range of prices. Here are just a few ways they can be constructed.

These kits require only basic assembly, like attaching the wings, as they come pre-assembled. Ready to fly RC planes can be in the air in just a few moments as everything you need is provided for you.

These types of planes need to have the engine installed as well as the fuel tank or other power source, landing gear, and a few other pieces of equipment. Typically, the only thing purchased separately is the power source for these models.

The Bind-N-Fly RC aircrafts are almost fully assembled with only the transmitter missing from the models. You have to bind the transmitter, which doesn’t come with it. They’re appealing to flyers who already have a transmitter.

The Basics of Flight

While toy-grade RC planes are easy and can be used by anyone, all other models need extra knowledge to fly properly. RC planes operate on a variety of factors from rudders, elevators, ailerons, and differential thrust.

• Rudder: A lot of planes are built with stabilizers, three fins, that make up the rear of the plane. The rudder can be found on the top stabilizer—it’s what allows the airplane to turn right and left. The rotation of the rudder is referred to as yaw among those interested in aerospace.

• Ailerons: Founded on some of the best RC planes, you can locate ailerons on each wing across the back edges. They can individually move, tilting down and up. They move in opposition to each other, which allows for planes to do stunts, rolls, and corkscrews.

• Differential Thrust: Used often in place of a rudder, differential thrust is another way to create yaw by spinning the propellers slower or faster. It reduces the number of parts needed but is harder to control if the plane isn’t throttled up. This makes this feature counterintuitive to those just starting out with RC planes.

How Are They Powered?

Model remote controlled planes have four possible ways to be powered. These power sources include electric, glow, gas, and turbine.

• Electric: It’s the most common way to power an RC plane to fly. Models run by electric are cheap and simple to use. It also allows you to recycle and reuse the battery in the aircraft.

• Glow: Planes that are glow powered are powered by an internal combustion engine with a glow plug that heats up the fuel enough for ignition.

• Gas: A gas fueled remote controlled plane is similar to a glow powered plane because they both use fuel. Where glow uses a glow plug, gas powered planes use a spark plug and pump gas.

• Turbine: Mostly used for RC jets, turbines are another way to power the flight of an RC plane. There are different models but almost all turbine powered planes cost more.

Many entities can subject restrictions and requirements for RC plane use across the world. The United States can have regulations from the Federal Aviation Administration, Federal Communications Commission, National Park Service, local and state government, and the Academy of Aeronautics. Picking up RC planes as a hobby can be overwhelming with all the information pertaining to them, but it’s rewarding and fun once you’ve found the plane right for you.